Connect with us
Die Roten may have placed one hand on the trophy with six games left and a nine-point lead over their nearest rivals.

There were quite a few talking points after this weekend’s games in the Bundesliga, starting with Bayern’s 4-1 win over Freiburg that kept Julian Nagelsmann’s team at the top of the standings. Bayern’s loss came with an extra bonus, as Borussia Dortmund were unable to keep up with them and are now further behind in the title race.

With the battle for the title nearing its conclusion, it will also be time to look at the teams that could enter European competitions next season and which ones need to step it up if they want to avoid relegation. Right now, Bayer Leverkusen and RB Leipzig could enter the UEFA Champions League, while Freiburg may earn the right to play in the UEFA Europa League next year.

Regarding those teams trying to avoid relegation, Stuttgart (27 points), Arminia Bielefeld (26 points), and Hertha Berlin (26 points) are fighting toe-to-toe to avoid relegation and the promotion playoffs. Meanwhile, Greuther Fürth seem destined to end the season in last place, which will condemn them to the 2. Bundesliga next year.

Here’s what happened in the Bundesliga this past weekend.

Bundesliga rankings as of April 3

Bayern are now nine points clear from Dortmund in the title race thanks to their weekend win and BVB’s defeat, leaving Marco Rose’s men a bit far away in the title race. Bayer Leverkusen are six points behind Dortmund in third, while RB Leipzig are slowly climbing back up in the standings with wins such as the one they pulled off against Borussia Dortmund. Freiburg kept the fifth spot despite their loss to Bayern since Hoffenheim were unable to win their clash this weekend. 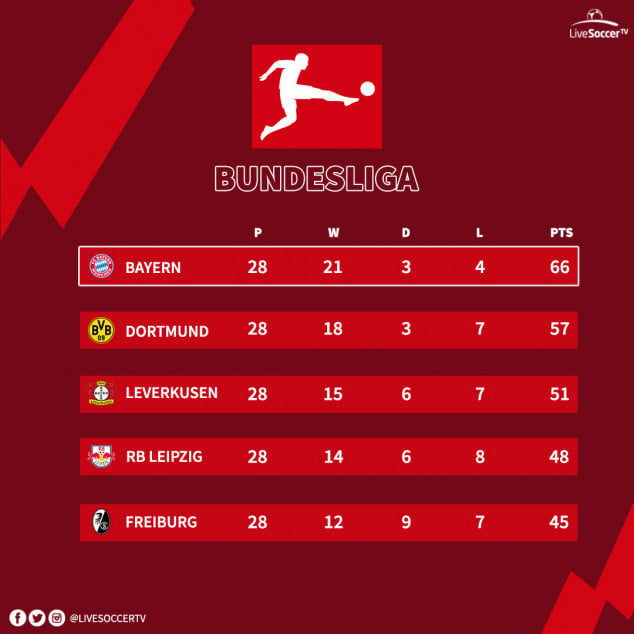 Who are the top three goalscorers in the Bundesliga?

Robert Lewandowski kept his lead at the top of the Torjägerkanone race over Patrick Schick and Erling Haaland with 31 goals. Haaland and Lewandowski did play this weekend, but neither one of them was able to find the back of the net in their respective matches. Nkunku among elite list of players for the 2021-22 season: It has been an incredible season for Christopher Nkunku, who has proven to be quite decisive for RB Leipzig and continues to dazzle opponents with his creative abilities. This weekend, the footballer became the second player among the top five European leagues to be involved in four games where he had to do with three or more goals scored, matching Karim Benzema’s tally of four matches with a similar record.

Reus joins Borussia Dortmund’s 350-game club: The talented midfielder had reasons to celebrate despite Dortmund’s loss against Dortmund, where he recorded his 350th game across all competitions for the Black and Yellow. He is only the 12th player to accomplish such a feat with this club, and judging by his form and stats, it seems that Reus could enter the top ten next season if he can keep up the good work.

Bayern extend goalscoring streak in 4-1 win vs Freiburg: It is no secret that Bayern are quite the goalscoring machine, but their latest win revealed a massive accomplishment for the Bavarians. During their 4-1 win over Freiburg, Bayern reached 75 games in a row with at least one goa, a never-seen feat in the Bundesliga before.